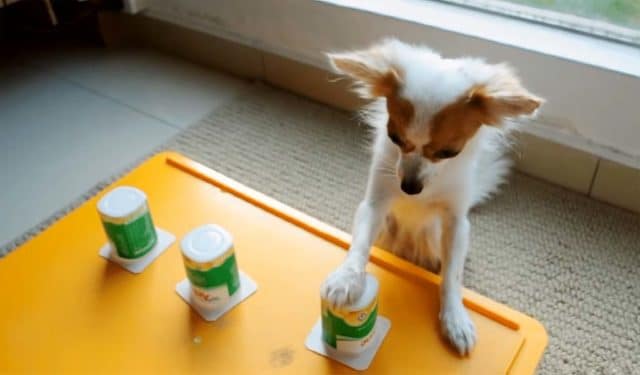 It is so fun to play games with our dogs. There are the usual games that we play which are things like fetch or chase. But for this human and her pup, the games are even more exciting and there are treats too!

This video shows the cutest Chihuahua intense in concentration as she plays a game of Cups. This is a guessing game where there are three cups in front of her and only one has a treat inside. She has to correctly choose the cup that has the treat in order for her to win it.

She also has to only choose one cup and if she doesn’t guess correctly, the game will start over. There is even loud music playing in the background as a distraction so you could really see how much she is following the game. Her owner puts a few treats in one cup and she shuffles them around as the Chihuahua waits for her turn.

You can see that she is really good at this game since she gets it right most of the time! This type of doggy game is great for their mental stimulation, and is one of our favorite indoor dog games to play on rainy days.

You can see her owner doesn’t make it that easy for her. Her owner shuffles around the cups for longer amounts of time and in more random ways to really get things going. However, the gaming prowess of this little dog always wins out in the end.

Check out this video of their game:

For their wedding day, Alexander Heritier and Madeleine Erba knew just who they wanted as their ring bearer: Daisy, an arson-detection dog. The couple...

Bridesmaids Hold Rescue Pups In Lieu Of Bouquets During Wedding

Pepsi, Once A Death Row Puppy, Gets To Play Superboy’s Sidekick...