Home Dog Health Can Dogs Eat Brussels Sprouts? Should They? 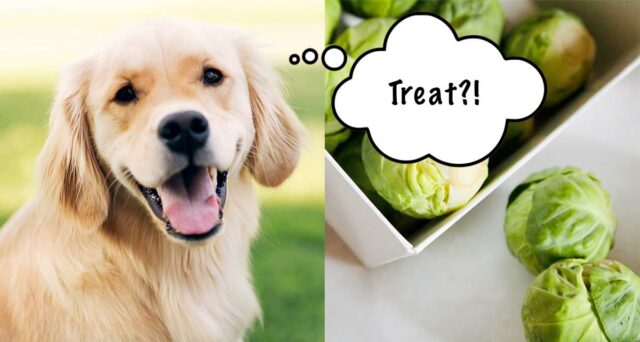 Can dogs eat raw Brussel sprouts? How about cooked Brussel sprouts? How do you even spell Brussels sprout? (Because they were first grown in the Belgian city of Brussels, the “B” is capitalized and there is an “S” at the end. Confusing, I know – you could just call them baby cabbages, but then again they aren’t cabbages, but they are related – give up yet? Let’s move on, can dogs even eat them?)

Let’s get right to the point. Can dogs eat Brussels sprouts? You’ll be happy to know, dogs can in fact eat Brussels sprouts. They are non-toxic and safe to eat. So if your furry friend just sniped one from your counter and you were wondering if Brussels are poisonous to dogs you can rest easy.

That being said there is plenty more to the story. Are Brussels good for dogs? Can they eat them raw or frozen, cooked or grilled? Will your puppy eat them in the house, on a boat, in the rain, on a train? (That’s a different story altogether)

If you are interested in learning more about Brussels sprouts and their relationship with your dog keep reading.

Are Brussels Sprouts Good for Dogs?

While Brussels sprouts may not be the most popular vegetable, there is no doubt that they are packed with nutrients. In fact, just one cup of Brussels sprouts contains more than 100% of the recommended daily intake of Vitamin C.

They are also a good source of Vitamin K, vitamin A, the B vitamins folate, B1, and B6, as well as the minerals manganese and potassium.

But what about our furry friends? Are Brussels sprouts good for dogs?

The answer is a resounding yes! In addition to being a great source of vitamins and minerals, Brussels sprouts are also low in calories and fat and high in fiber. This makes them an excellent addition to any dog’s diet.

In fact, many veterinarians recommend using Brussels sprouts as a healthy treat for dogs who are trying to lose weight. So if you’re looking for a way to add some extra nutrition to your dog’s diet, Brussels sprouts are a great option. Just keep in mind the 10% rule: ten percent of their diet can be “treats”, that includes any human foods.

Not only are Brussels rich in vitamins and minerals they contain a couple of secret (okay not so secret) compounds called sulforaphane and indole-3-carbinol. These phytochemicals are also found in other cruciferous vegetables like broccoli, cabbage, cauliflower, and kale.

How to Cook Brussels Sprouts for Dogs?

When ingested, isothiocyanate affects the muscles in the intestines. Digested food shoots through the intestines, creates excess bacteria and causes gas to build up. At best you’ll have a stinky dog, at worst it can cause diarrhea and other intestinal problems. For these reasons, it is best to avoid giving your dog raw Brussels sprouts. If you must feed them to your pet, cook them thoroughly first to make sure the isothiocyanate is removed.

So how then, do we cook Brussels for dogs? The best method to retain all those good for doggy nutrients is to steam them. Roasting or grilling is another valid options. Boiling Brussels sprouts can often leach out too much of the good-for-you nutrients and produce mushy gross Brussels – blech!

How to Steam Brussels Sprouts

Without a steamer – Place the Brussels sprouts in a large pan and add water just to cover. Cover and simmer over medium heat for 5 minutes or until fork-tender, swirling halfway through the cooking time.

With a vegetable steamer basket – Place the basket inside your pot, fill with enough water to reach the bottom of the steamer basket. Cover and bring to a boil. Add the Brussels sprouts and cover back up for 5 minutes or until the Brussels are tender when pierced with a fork.

Instant pot – Add 1.5 cups water to the pressure cooker’s bottom. Insert the steamer basket and place Brussels inside. Close and seal your instant pot, then set the timer for 2 minutes. After 2 minutes, quick release and enjoy your freshly steamed Brussels sprouts.

Microwave – Put your Brussels into a microwave-safe dish. Add about ¼ cup water. Cover with a wet paper towel and microwave for 3 minutes or until tender.

How to Roast Brussels Sprouts

Another yummy way to cook Brussels sprouts for dogs is to roast them. First, cut the sprouts in half and remove any tough stems. Then, toss the sprouts with a little olive oil and sea salt. Spread them on a baking sheet and roast at 400 degrees for 20-25 minutes.

Roasting brings out the natural sweetness of the sprouts and makes them extra crispy – just the way dogs like them! You can also add a little bit of bacon or Parmesan cheese to the mix for an extra special treat. Just be sure to let the sprouts cool before serving, as they can be quite hot.

*Note on seasoning and oil – again, too much oils and or butter isn’t good for dogs so roasting them plain is just fine if you are making them just for your dog. If you are sharing a few with your pooch but making them mostly for your enjoyment light seasoning is fine.

One cautionary thing to note is to make sure you do not prepare your Brussels sprouts with onions, leaks, shallots, or garlic.

These vegetables are all in the allium family. They are toxic to dogs and can cause hemolytic anemia, a condition that damages red blood cells. Broken red blood cells are unable to transport oxygen throughout the body, resulting in a weakened state and other adverse effects including high heart rate, anemia, and paleness of the gums. Giving dogs any of these foods might cause vomiting, diarrhea, loss of appetite, stomachache, and dehydration.

Yes and no. The stalks and stems can be pretty fibrous and tough even when cooked so they may be a choking hazard. The leaves when cooked should be perfectly fine. Sticking to fresh Brussels is still your best bet.

While frozen Brussels are perfectly fine for dogs to eat they can be a chocking hazard because they are usually just swallowed hole. To be safe cook them first.

Some do some don’t. Just like any food some dogs will take to it right away and others will always turn their noses up at it. If your dog doesn’t like Brussels there are plenty of other yummy fresh treats they will like better.

What if my Dog Eats a Raw Brussels Sprout?

If your dog manages to snag a raw sprout from the counter it’s really not the end of the world. While it’s not the best thing for them to eat raw they will not likely suffer any ill effects from it, other than some stinky toots. Just be sure to wash the sprout first as they can harbor bacteria.

Puppies can eat Brussels sprouts that have been cooked properly. Start by giving them a small amount to make sure they don’t have any adverse effects before giving them more.

When Are Brussels Sprouts in Season?

Brussels sprouts are typically in season from October through March, but you can usually find them year-round in most grocery stores. When making Brussels for your dog make sure they are as fresh as they can be – and make sure to wash them well to remove chemicals.

How Many Brussels Sprouts Can I Give My Dog?

When introducing any new food to your dog, it’s important to start with just a small amount. Dogs typically do best when given about 10% of their daily caloric intake from treats. For a small dog, that means just a few Brussels sprouts. For a large dog, you can give them a few more. If your dog is on the smaller side, you can also cut the Brussels sprouts in half or quarters to make them easier to eat.

As always, if you have any concerns about your dog’s diet or health, be sure to talk to your veterinarian.

Have you ever given your dog Brussels sprouts? How did they like them? Let us know in the comments below! 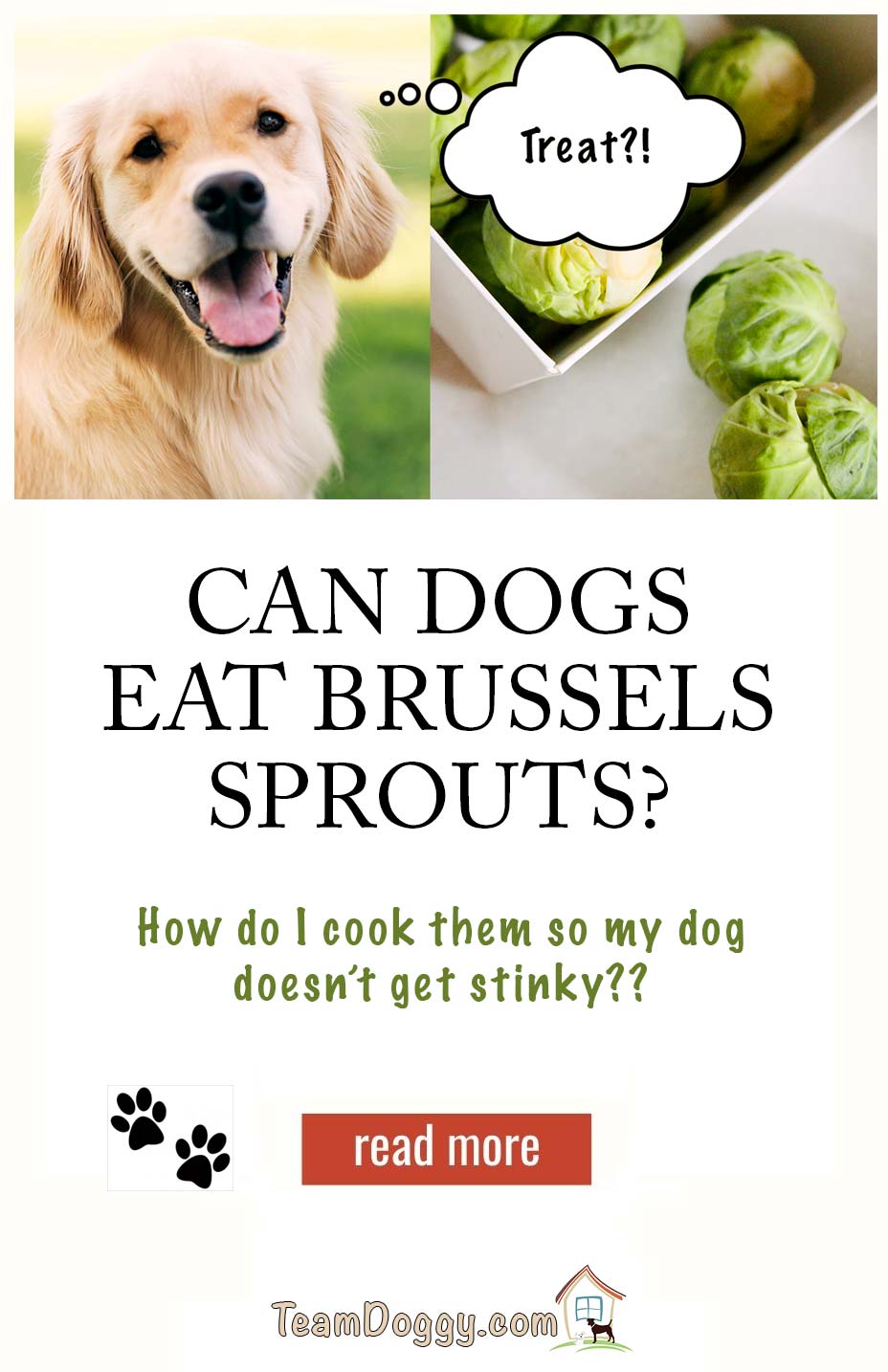 Safe Chew Toys For Dogs (And Ones to Avoid)

How to Get Rid of Dog Dandruff Incredibly Fast

How to Groom a Bullmastiff: 5 Quick Tips for a Healthy Mastiff