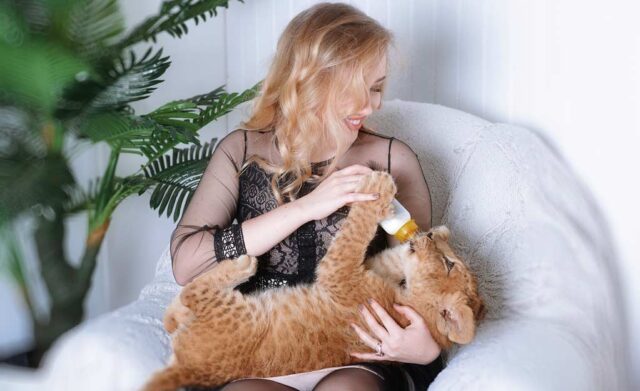 Dog and puppy videos are one of the most adorable videos that you can find on the internet, and if you add a lion cub into the equation, the video becomes even more lovable.

Back in 2014, in a Sri Lankan zoo, a lion cub was rejected by her mother, and the zoo staff was worried about how the lion cub would be raised. The staff wanted the cub to grow strong and did not want it to miss out on some precious motherly love. The staff at the zoo came up with the idea of getting the cub fostered by a canine mother instead of another lioness. So the staff put the cub in a litter of newly born puppies, hoping that the mother dog would treat the lion cub as her own pup.

In the beginning, the dog did not seem interested in the cub, but it took her only a few hours to start showing the same kind of motherly love that she was showing to her pups. The dog’s maternal instincts warmed her over.

Heshan Mendis, the dog owner, said that it took the dog only five to six hours to change her mind, and the pooch started treating the cub as her own pup.

The cub was welcomed into the litter not only by the mother but also by the puppies too. The puppies did not seem to mind having a lion cub among them at all. The puppies and the cub played together just like a natural litter.

As the lion grew, it needed to be shifted to a suitable home identical to its natural habitat. The lion cub was first moved to a zoo and then later to a sanctuary built for wild animals. The cub has now turned into a fully grown lion.

The lion cub was truly lucky that his canine mother’s love was so vast that she could share it with babies of other species too.

Here is a video about the story.