Home Team Doggy Stories The Cutest Photo Shoot Ever: Cat And Dog Best Friends In A... 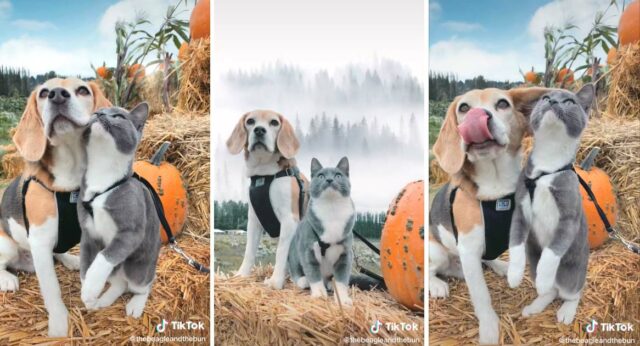 When Chloe, a beagle, lost her closest friend Rue the rabbit, she was naturally devastated. That is why her fur parent desired to cheer her up, so she chose to adopt a cat named Chlea.

Since their first meeting, the beagle and cat have become inseparable. Without a doubt, the dog will always love Rue, but thankfully, she will now have another BFF.

According to their mother, Megan Cottone, Chloe is sweet and tolerant for a beagle, and Chlea is very dog-like in her behavior. The adorable kitty desires to accompany Chloe and her mother wherever they go. Cottone therefore always brings her along.

The cat adores walking on a leash, and she frequently embarks on outings and adventures with her canine sibling. The pair’s most recent expedition involved a trip to a pumpkin patch.

When they reached the pumpkin patch, both Chloe and Chlea were excited and eager to explore. While the beagle was crying, her best companion began meowing. Fortunately, they discovered a rather calm pumpkin patch where they could enjoy sniffing around on their own.

As Chloe and Chlea went around the pumpkin patch, they took several stops to take photographs, and the results were fantastic. These images have become viral online and many people were really warmed by the adorable photos.

Chloe and her cat sister have not been best friends for very long, but they have already mastered the art of shooting pictures together. All of the photographs of the best friends in the pumpkin patch resemble those of models.

Chloe and Chlea were ecstatic to have their photos together given their close relationship. When they are together, everything else is irrelevant.

These two lovely animals have been close buddies ever since they first met. As it appears, they will stay lifelong best friends. They will hopefully have many more adventures together.

The cutest pumpkins in the patch 🎃 #catsanddogs #october

Keep Reading: To Reduce Employees’ Stress, An Office Is Taken Over By Dogs