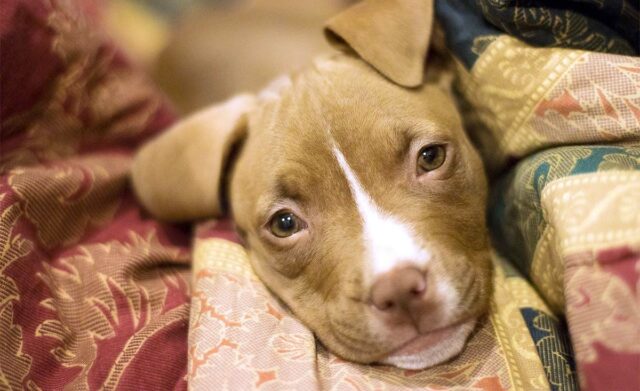 Although many rescue dogs in shelters are quickly adopted, some are left behind with slim possibilities of being adopted. We all feel that all dogs deserve a family and a loving home with dog lovers.

However, not all dogs are really lucky enough to have these. A good example is a dog named Aladdin that was repeatedly turned down. It seemed like there was simply no one interested in adopting him.

Rescuers discovered Aladdin on the side of the road. He was a pit bull who weighed barely 18 pounds and had a variety of health problems.

Aladdin’s previous owner abused and neglected him, eventually abandoning him. He was rescued and sent to an animal refuge.

When Aladdin arrived at the shelter, he had a number of issues that needed to be addressed. The dog had a heart tumor that required surgery, radiation therapy, and he also had cancer in his mouth. People were hesitant to adopt Aladdin because he had so many health problems.

Thankfully, Aladdin was successfully able to overcome each one, and he was fostered by Michelle, a kind woman who works for Lilo’s Promise, an animal sanctuary. Michelle fell in love with Aladdin’s lovely and caring demeanor when she fostered him, and he soon became a member of Michelle’s family.

Despite his prior owner’s cruelty, Aladdin still loves people and is filled with optimism.

Michelle got Aladdin licensed as a therapy dog, but because he’s a Pit Bull, many people were doubtful. People soon recognized, however, that Aladdin had a sweet and loving demeanor.

Aladdin enjoys being among others and exudes such a wonderful vibe that those who come into contact with him feel happier.

Michelle once agreed to let Aladdin do what he wanted to do since he was intent on meeting a man at the airport. The man had recently lost his dog the day before and was overjoyed when Aladdin approached him to console him.

Aladdin is an excellent illustration of why all pets deserve a second chance. Despite everything that this dog has been through, he has grown into an amazing dog that enjoys cheering others up.