Home Team Doggy Stories Kacy Did You Do That? Cute Maltese Rats on His Sister 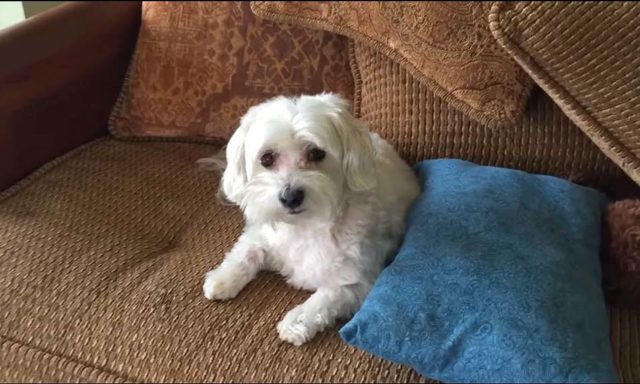 Have you ever caught your dog in the act of doing something bad? They show such a human reaction of guilt you’d swear they could understand Human language.

Yes, dogs can learn many words and associate them with commands – sit, stay, jump in my lap and lick my face until I giggle with happiness (I’m not sure what the command word for that one is)

The point is dogs are pretty smart. But when caught in the act they truly could pass for human.

Maybe you’ve seen this video of Gnarly and Kacy, two adorable Maltese, but if not you are in for a treat.

The video starts with a cute little puppy looking innocent sitting on the couch. The camera pans down to the floor where you see a pile of shredded tissues.

Someone is sure in trouble but Gnarly isn’t fessing up. He sure plays the innocent card well don’t you think?

Gnarly finally caves under the pressure and gives the nod to Kacy.

Then the camera pans to the other dog. This is where the unexpected surprise happens. It gets me every time. I bet you won’t be able to hold back the laughter either.

Watch the quick video below to see what I mean.

Bet you weren’t expecting that were you? And the other dog on the couch didn’t give much away either. Just sat there in stoic silence while his owner grilled him for information.

You would swear he knew exactly what his owner was saying and didn’t want to give up the ghost.

Do you have a good story of your dog caught in the act? What did they do when you confronted them?