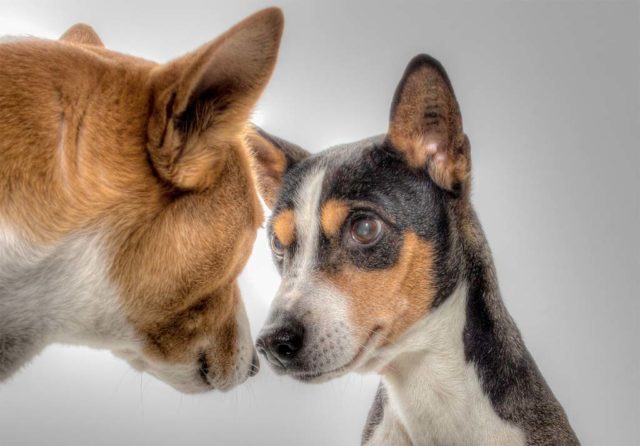 One evening a man named Matt Bentley was 4-wheeling out in the Utah salt flats. He came across a dog in the middle of nowhere. At first, Matt wasn’t sure if he was even looking at a dog. The dog had no fur and Matt could quickly tell how hungry the dog was.

Matt brought the dog to the Utah adoption center for dogs. There, the excellent staff stepped in to make sure the dog was taken care of. They later named her Kelley.

Jamie Jaque and her daughter volunteered at the rescue center, and they asked to see Kelly. Jamie felt an instant bond with Kelly and later became her adopter. She recalls seeing a fearless Kelly. There was no tension, only sweetness.

After 3 months of being cared for, Kelly had grown her fur. It was thin at that time, but it was enough for her to look more presentable.

When Kelly came home for the first time, she was greeted by Rocky an 80-pound golden doodle. Rocky showed Kelley around the house, and from that moment forward, they became best buds.

Jamie was very grateful to Matt for saving Kelly. If it weren’t for Matt, Kelly wouldn’t be in her care. Out of gratitude, Jamie decided to meet up with Matt to show him how much Kelley has changed.

The day of the reunion came. Matt is expecting to see Kelley happy and well. While driving to the meetup location, Matt took the time to buy a chew toy for Kelley.

The experience was surreal for both parties. It was an emotional reunion. Matt could hardly recognize Kelly because of all the fur she has now.

Matt told Jamie about the snowstorm they had a week after rescuing Kelly. The dog wouldn’t have survived if Matt had not taken Kelly in. Matt expressed how grateful he is. He said that he wouldn’t be able to provide Kelly what Jamie was able to provide.