Home Team Doggy Stories Fur Mom Sets Up Security Camera To See Why She Has Trouble... 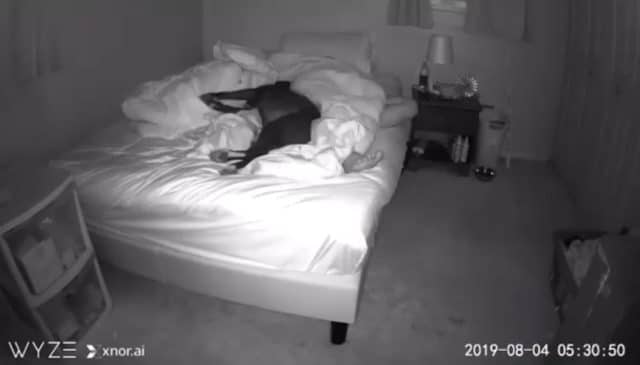 Kristin Wolf and Fenway, her Labrador pit bull mix, have been together for the last five years. Since the day they met, they would rarely sleep apart. Fenway loves snuggling with his mom. Kristin, on the other hand, likes the security that she feels when her pup is nearby.

However, lately, Kristin has been wondering if sleeping next to her beloved pup is beneficial for her sleep. Kristin said that she always wakes up laying sideways. Sometimes, she even finds herself at the foot of her bed.

As you’ve noticed all week I’ve been telling the stories of the very start of Fenway and I. 5 years ago Fenway came to…

Posted by Fenway's Fight Against Blastomycosis on Monday, July 15, 2019

Kristin does not want to assume that Fenway was causing her interrupted night’s sleep. So, she thought that it might be best to find out for herself. Kristin purchased a camera and placed it in her bedroom. This way, she would have a time-lapse video to track their nightly movements and know what the problem is.

The following day, Kristin watched the video. To her surprise, she saw that her little pup was fairly calm. She, however, was the one disturbing Fenway during their sleep. Kristin was moving a lot while Fenway didn’t want anything but to snuggle with his mom.

So grateful my dog let’s me sleep in the corner of his bed❤️Has anyone else ever done a time lapse like this?! This was actually a good night and he let me sleep in 😂

According to Kristin, Fenway was previously diagnosed with blastomycosis, which is a fatal fungal disease. He fought for his life for years, and now, he is on remission. However, Kristin noticed how Fenway’s health changed the way he sleeps. Back when Fenway was sick, he was a lot cuddlier. He would tuck himself under Kristin’s arms like a little spoon. But, now, he only prefers the bend of his mom’s knees.

Kristin also noted Fenway’s bad sleeping habits. Usually, he steals her blanket and hogs the couch. Despite that, Kristin wouldn’t change him for the world. She even once dumped a guy because he didn’t like her pup to sleep in her bed. She loves her puppy like that.