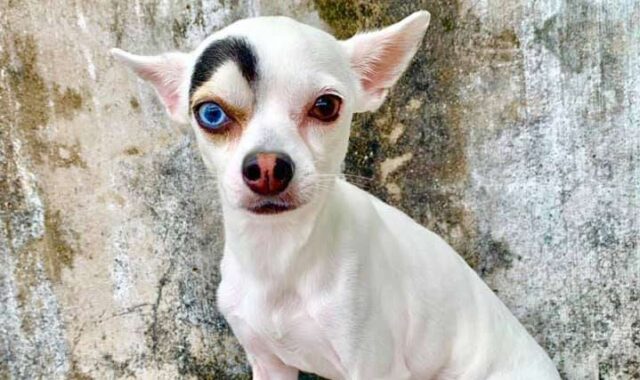 Many netizens from all corners of the globe have become smitten with Lucky. Lucky is a chihuahua mix and he is a dog rescued in Thailand. He reached global fame when his owner took a photo of him and posted it on Facebook.

Why did Lucky go viral? Well, this is because of his really unique facial features that make him stand out among other dogs. See, he has what looks like one thick right eyebrow. Now that is something you do not see every day on a dog.

But what really catches your attention is his eyes. You’ve probably seen dogs with two different eye colors, Lucky captivates you with his. One comes in a dark brown shade while the other eye is a vibrant electric blue. All in all, one look at this dog and he seems to be something from a fairytale or futuristic movie.

Charice Fca Cha owns Lucky and she said that she adopted Lucky when she came across the dog’s photo while browsing on Facebook. The caption mentioned that Lucky was available for adoption and that was all that it took for Charice to go ahead and do just that.

Charice said that she just fell in love with Lucky upon seeing him. The person who posted Lucky’s photo was his original owner. Charice contacted the owner, they settled on how things will proceed, and soon, Charice was happy to be taking Lucky home.

As the new owner of Lucky, Charice was just ecstatic. She wanted to share her joy with her friends so she took a photo of her dog and then posted it on Facebook. But what she didn’t expect was how many people reacted to the photo. In fact, Lucky and his mesmerizing blue eye went viral capturing more than 11,000 reactions and counting.

We are really not that surprised though. Lucky is one unique pooch!

Watch another adorable dog the size of a hamster as he grows up to be a spunky lovable ball of fluff.