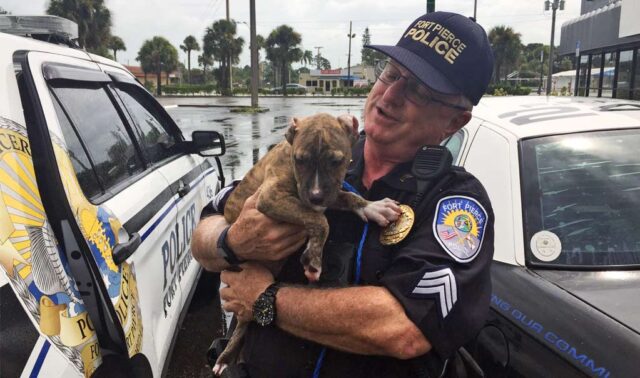 Hurricane Dorian was heading for Florida but before that happened, a police officer in the state went out to adopt a puppy. He said that he wanted to help save the 6-week-old dog before the catastrophe.

This story has been shared on Facebook by the police department of Fort Pierce. The post mentioned that two officers, Michael Jean and Martin Ortiz, had gone to respond to a call from a local resident during one of their shifts. According to the resident, she had a puppy she couldn’t take care of.

Upon checking out the situation at the caller’s home, Michael instantly fell in love. The puppy was adorable! So he called his wife on FaceTime and told her and showed her the dog. His son was also on FaceTime and he wanted to have the puppy upon seeing it.

The puppy was named Dory and she was a Brindle Pitbull. Supposedly, Dory was to be brought to the shelter but that was impossible since she was too young. It was a good thing Michael met Dory and he decided that he would take the puppy home.

The police force was supportive of Michael and they pushed him to go and adopt Dory. In the end, Michael decided that the puppy would go home with him because of the oncoming storm.

Before Hurricane Dorian hit, the National Hurricane Center said that this natural disaster would not be making landfall but it was still best for people to prepare because storms like this one can change course at any time.

It was a good thing that people really did prepare and people like Michael were able to help the puppy named Dory. Hurricane Dorian did bring a lot of damage to plenty of places and for a puppy that doesn’t quite understand what is happening, it is great to have a person like Michael taking him home and giving him a warm and loving family.

Here’s another heartwarming story about a girl that sends a letter to God to ask to take care of her pup.