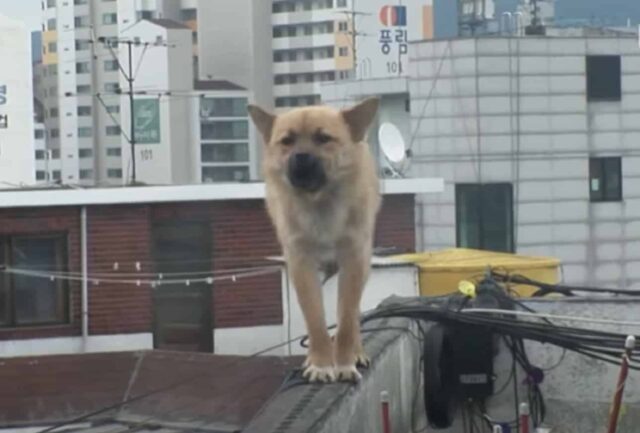 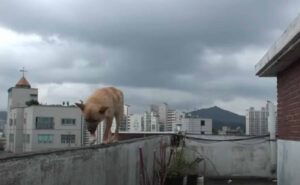 In a residential district near a commercial area in South Korea, people commonly live in apartment buildings. People passing by noticed a dog standing on the ledge of the roof in one of the buildings. At first, the people on the streets looked up amazed at the sight.

But when these people saw the dog staying up on the ledge for several days, they began to worry about the dog. Some individuals went up to see the condition of the dog. But the dog became agitated whenever a person tried to come closer.

Nobody could come close to the dog

The apartment building was a five-story structure with a roof deck on top. The ledge of the roof deck was only about 12 centimeters wide. There were a lot of cable wires tangled along the path. The dog could easily trip on these wires.

Nobody knows who owns the dog. But somebody needed to get the poor animal off that dangerous ledge. The dog might fall if somebody approaches, and it tries to turn and run away. Several people attempted to lure the dog with food. But the dog avoided people and refused to come closer.

Several concerned persons devised a plan to rescue the dog. The next day, the rescuers began implementing their plan. They closely monitored the dog and worked quietly as far away from it as possible. They didn’t want to spook the dog before they were ready.

The dog suddenly fell from the roof

As the rescuers worked, the dog became sleepy. Then it lost its balance and slipped. Some rescuers started going down the stairs while the rest went to look over the ledge. Everyone frantically tried to find where the dog fell.

The dog fell on the roof of the adjacent building. Miraculously, the dog fell unharmed. Shaken and dazed, the dog had no more energy to resist. The group quickly brought the dog to a veterinary clinic to check on its condition.

After several days in the clinic, the doctor found the dog in good health. The rescuers took the dog home. The group hopes to find a family that would adopt the dog.

Special thanks to SBS TV via Youtube for the image used in the story.