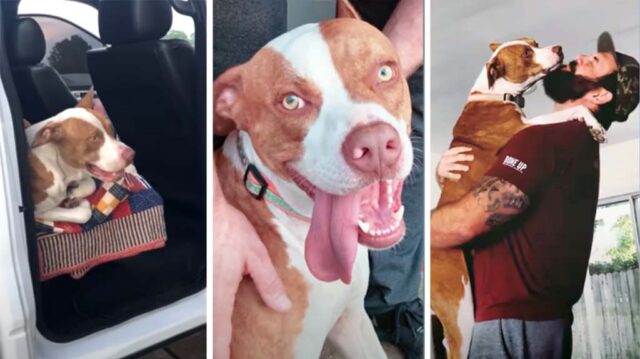 Getting a new dog for most people is a process of researching, searching and finally finding the right dog for your family. But sometimes the right dog finds you. And this time it happened in the most unusual fashion.

Here’s a story of a dog who entered a couple’s life by climbing inside their truck without them knowing.

It all began when Emily and Garrett were on their way home from a yoga session. When they opened the door to their truck they noticed a flash of fur and a swishing tail dart into the front seat of the truck.

Buddy, the dog just looked at them like he owned the car. He just laid there and took his time to relax.

Emily was quite in awe not knowing what to do with this dog who seemed to have claimed them as family. Emily tried to feed Buddy with roast beef to gain his trust. It took quite a long time to get Buddy out of the car.

Emily and Garrett didn’t know what to do, despite their calm coaxing he just didn’t want to leave the truck. After a few hours, he eventually got out.

When they got home, Buddy passed out and slept all day long. The next day, they took Buddy to the vet and tried to find his owner. They discovered Buddy didn’t have one.

Emily was delighted when she found out that Buddy didn’t have any owner. Because of that, Garrett and Emily adopted their first dog and welcomed him to their family.

Garrett never thought in his entire life that he’d ever own a dog. And then there goes Buddy who sprung into their lives out of nowhere.

…until a few weeks later, when he unexpectedly ran off into the woods. They searched and searched but couldn’t find him. Watch to find out what happened next!

Up Next: Watch another heartwarming video about a man that becomes the miracle to a troubled dog no one wanted.

Woman Quits Her Job, Buys A Van, And Travels Around The Country With Her Two Dogs

It's the middle of the year, but there's nothing quite like looking at your calendar and seeing the cutest puppies ever to exist! And...

Woman Quits Her Job, Buys A Van, And Travels Around The...

Elderly Man Built A Cart So He Could Walk His Senior...