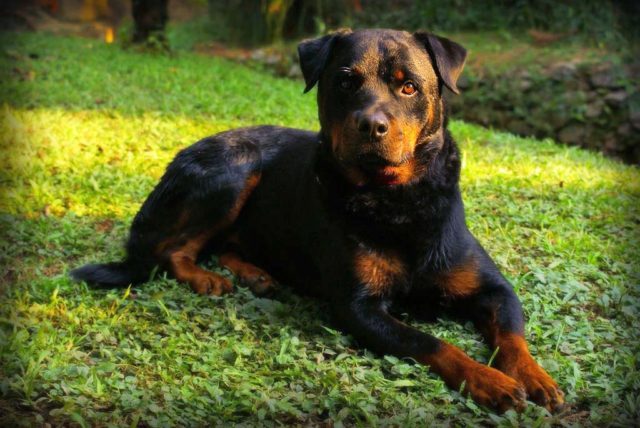 The list of dog breeds below are are ideal for a single female living alone. They are all strong, protective animals that will provide you with loyalty and strength in return for your care. These dogs have been bred to be loyal partners whether it’s on duty or at home by their owners – if this sounds like what you’re looking for then look into adopting an animal companion from this list.

However, there are other considerations to make such as the dog’s personality and looks. To aid you in this process, we’ve compiled a list below.

This one may not be the best guard dog. However, the looks will have you thinking twice. The dog’s thick jaws, strong neck, and muscular body make them look far tougher and braver than how it actually acts. A strong dog needs to learn some of the basic techniques so that he will have better manners.

However, these dogs are very friendly even to strangers thus they may not make it as the top protection dog to have for a single woman living alone. When around kids, they’re very good. But this changes when they’re around other dogs.

This is a great dog if you find one from a reputable breeder that makes sure your dog does not have health issues. German Shepherds have a bark that is quite deep and loud. They are also ranked as one of the most popular dogs in the United States and are known to be quite fierce because they are usually associated with working with the police and military. Home invaders always avoid houses with these dogs.

It’s a large dog that can weight up to about 90 pounds. They’re often used by professionals to serve as a guard dog or even a service dog. They are also being used as drug and bomb sniffers.

Shepherds come in various colors. But most of us are used to seeing those that come in black and tan colors. You can find some that are all black or all white though they may also come in a variety of other colors. With a distinctive alertness and bushy tail, Shepherds are easily recognizable. Not only are they intelligent, but they are also loyal. If they’re socialized, they’ll deal accordingly with visitors.

Belgian Malinois were originally farm and ranch working dogs bred to protect the livestock. Due to the fact that they love to please people when given a job to do they make outstanding protection dogs for women living alone. With bundles of energy and playfulness they aren’t just tough guard dogs – they make wonderful loving companions as well.

Belgian Malinois are incredibly smart dogs that take to training like a champ. Their high intelligence and high desire to please their owner, along with their extreme sense of loyalty and work ethic, make them a favorite for military and police dogs.

Despite their fierce protective nature they can be gentle around children and warm loving family dogs. So there is no need to worry about them around guests (as long as they are invited guests)

These dogs are actually bred and trained so that they make outstanding protection dogs. For this reason, they are a great choice for women living on their own who may need a pet that is loyal and strong.

It turns out that they’re really quite intelligent dogs as well. They’re also easy to teach and train and they will understand what is being taught to them. They will also understand their role, which is to guard their owners and their territory. However, without the proper training and control they can be aggressive. This is usually the case with strangers.

They’re measuring around 26 inches for the withers, and can weigh around 70 pounds. They’re also athletic and quite muscular. Most of them come in black and tan hues. However, there are various other hues around as well. The breed’s health problems may result from the thorough process of selection that is a part of breeding the Doberman that we know now.

Some suffer from dilated cardiomyopathy which is a type of heart disease in dogs as well as cervical vertebral instability which is a disease of the musculoskeletal system.

This breed is a great watchdog for the entire family and makes for a great companion for single women. They are very loyal companions and are more than happy to serve as guard to their human.

Some can weight up to 130 pounds. As a matter of fact, not everyone can handle these dogs. It’s therefore important to take into consideration their size. They also need some level of socialization due to their size and activity level. They also have a greater chance of developing obesity if they do not get enough exercise.