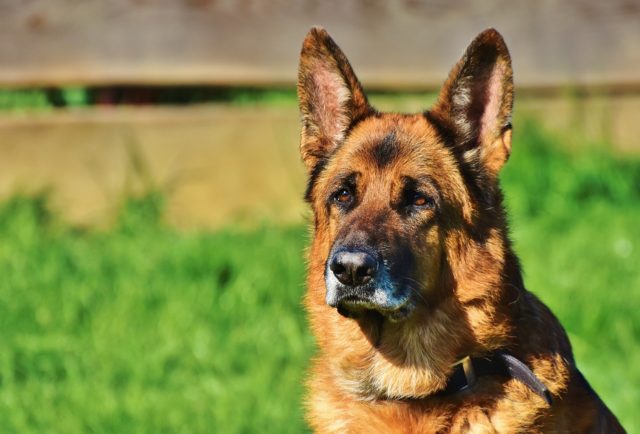 If you need a guard dog, it needs to do more than alarm the whole family of an intruder. In a worst case scenario they will also need to attack when necessary to deal with malicious strangers or animals.

You don’t want to deal with a Doberman (if he is not your dog that is). A Doberman is an efficient guard dog on many a large estate, or any property. They are very brave and can run very fast. They can easily reach and tackle a trespasser in any part of your property. The breed makes great police dogs.

Known for its brutal bite, the Giant Schnauzer is also very imposing because of its size and fierce barking, hence the name Giant. But in order for them to do their job, proper training should be applied and keep them engaged in many physical and mental activities.

The German shepherd is a dog breed considered to be highly intelligent, easy to train, confident and extremely loyal. In fact, they are known to risk their own lives just to save and protect their family.

They are also a popular choice as a police dog because they can be trained to follow a variety of commands for different duties. They can be ruthless to strangers, but completely the opposite when it comes to their family.

Rottweilers are also great in Police work, including being a choice as Search and Rescue Dogs. They are also very fierce when it comes to being a guard dog. They are very devoted to their family but can become ferocious when its family is faced with an intruder.

The breed is large and very powerful. They can protect their family from any trespassers. As the name suggests, Komondors have the innate instinct to protect sheep.

Highly intelligent, they have a natural drive to protect their loved ones. When an intruder strikes they will automatically know what to do.

Bullmastiffs were developed as a guard dogs in the nineteenth century to guard against poachers. They were originally a cross-breed of the English Mastiff and the now-extinct Old English Bulldog.

While they look like fierce strong dogs they are also very protective of their people. And do make loving, loyal dogs when they aren’t protecting your home.

The Akitas are very domineering, strong and independent. They make great guard dogs and can easily tackle strangers. However, when it comes to their humans, they are very loyal and can show immense love.

The breed is highly intelligent, very energetic, protective and hard working. They can be trained to do new tasks and are mostly used as a working dog. Moreover, they are also used as guard dogs for people and properties. Proper physical exercise are necessary to raise and train a Belgian Malinois to be a good guard dog.

The breed originated from China and was used to guard Buddhist temples and palaces. They can be very protective of their family and property. They are loyal and well-behaved. However, they can show aversion to training and may be stubborn as they grow old. That is why it is necessary to start their training at a young age.

As part of its instinct, Kuvasz can guard your home and family really well. They are very loving toward their humans but can be vicious toward strangers.

Every dog, including a guard dog, must be prepared to deal with additional duties. These duties include proper training and socialization. Safety is another factor that must be kept in mind at all times.

While these dogs can be dangerous to strangers if trained to be guards dogs, they can also be loving family pets. Moreover, you’ve probably heard there are no bad dogs – only bad people. Proper training of a guard dog is important to keep you and your family safe.