Home Team Doggy Stories A Professional Mountain Biker Found The Perfect Way To Bond With His... 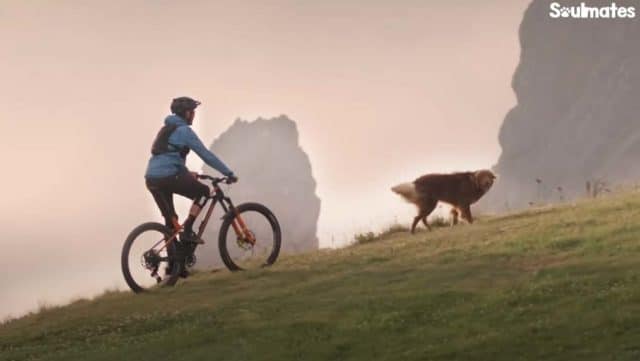 Have you ever taken your dog for a bit of adventure in the great outdoors? Perhaps you’re a hiking pro and having your dog accompany you is a must. But, if you’re not a fan of the wilderness, perhaps this story will inspire you to take your dog and explore a few nearby nature parks.

When Oli met Balu, he was a professional mountain biker. He’s always on the go and often traveled alone. That’s why it was a huge boost to his happiness when he got his dog, Balu.

In the beginning, Oli showed Balu his bike. He wanted to introduce him to the sound of the bike. That’s when he realized that Oli liked the bike as well.

After the discovery, they started spending time together every day. Nowadays, Balu is always with Oli in their mobile home.

Balu usually takes the lead, and Oli adjusts based on his dog’s speed. He makes sure that the dog is always ten meters in front of him. Oli also makes Balu wear shoes when they are going through a rough path full of gravel.

According to Oli, the first trail was the most memorable one. It was the time he felt so happy to see his dog enjoy what he enjoys too. It was also the time they figured out that Balu should take the lead.

Oli didn’t know a lot about dogs at first. However, when he met Balu, they just clicked. He knew that was the dog he wanted.

Balu doesn’t have a leash since they live on a farm. He is allowed to do what he wants. Despite that, he knows to always stick around. He knows he’s part of Oli’s family.

Riding with Balu is like Riding with a best friend, according to Oli. He’s happiest when they are riding together and enjoying what nature has to offer. These two are a perfect fit.

Check This Out: Another lovable pup shows off how much he loves his family in this quick video.

Dogs who have disabilities tend to have a harder time finding a permanent home. When a story of them getting adopted is posted on...

A Small Boy Who Grows Up With His Dog Best Friend...

A Lucky Kelpie Enjoys Mouth-Watering Dishes From His Beloved Father Who...