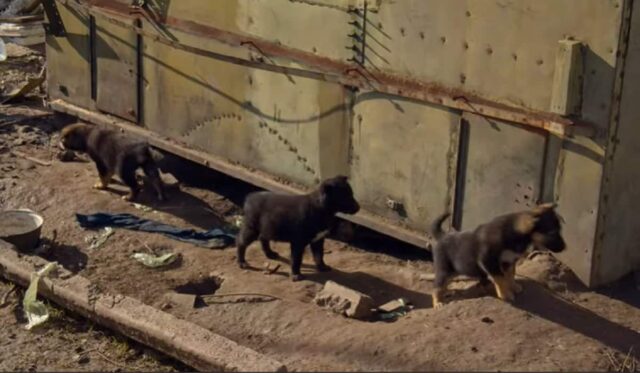 Somewhere in a quiet residential area in Ukraine, an unknown person left five puppies in a fenced up property. An old shack was the only structure on an otherwise empty lot and the puppies’ cries echoed throughout the neighborhood.

A resident in the area called a local animal organization called Love Furry Friends. The organization was locally known for taking abandoned or abused animals from the streets and taking them under their care. This group has a Youtube channel and encourages people to adopt the animals they rescued.

Calling for help for the poor puppies

He hoped the group would come and help the poor creatures. The next day, the team arrived in the morning at the address given to them by the caller. They needed to get the dogs before winter comes.

The rescuers could see just three dogs inside the fenced property. Two team members climbed over the fence to enter the lot. The puppies immediately ran under the old shack.

Another team member prepared food on a big plate. He gave it to his teammates inside the property. The rescuers offered the plate of food to the puppies. But the puppies were too afraid to come out.

The rescuers stepped back for a while and waited for the puppies to come out. One by one, the puppies crawled out and ate the food on the plate. After about an hour, the little dogs became used to the presence of the rescuers.

The puppies no longer resisted being taken by the rescuers

After eating, the dogs wagged their tail and became friendly with the team. The rescuers were able to carry the puppies out and placed them into dog carriers. Before the day was over, the group successfully rescued the puppies.

The rescuers hoped that whoever took the two other puppies would take care of them. As for the three dogs they rescued, they would work to find new homes for them.

Watch the video about this heartwarming story below.