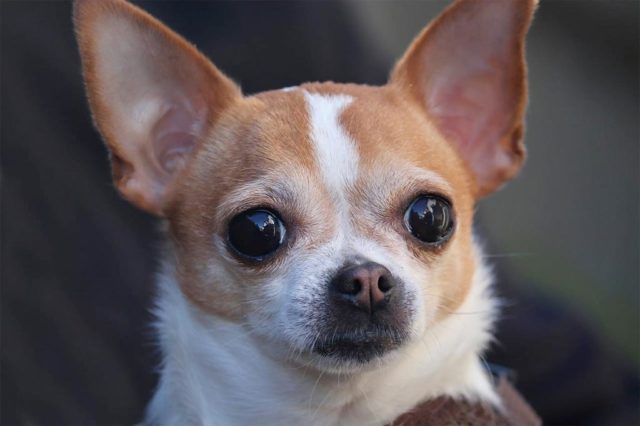 Dogs often become aggressive for several reasons. Dog aggression often results from fear and sometimes possessiveness. If you think your furry companions are showing signs of aggressiveness, seek help early on before it spirals out of control. It is the responsibility of a dog owner to ensure that his dog receives the appropriate training to help resolve such behavior.

It’s important to understand that aggressive dogs are not born this way. Many experts believe that aggressiveness could be a result of poor or lack of training. A dog without training will respond to situations using their instincts, which we humans view as aggressiveness.

Meet Sunshine, an aggressive rescue Chihuahua. She is one feisty dog, always baring her teeth to anyone who dares to look at her.  It resulted in people skipping over to the next available dog for adoption.

The angry Chihuahua had to stay in the kennel for a while until her picture posted online and caught the attention of a woman named Tammy.

Tammy saw how aggressive Sunshine was just by looking at the photo. But this didn’t weaken Tammy’s resolved. She drove to Philadelphia to meet the angry Chihuahua. Someone recorded Tammy and Sunshine’s first interaction in her cage.

The Chihuahua was exhibiting all the signs of aggression, including growling, ears laid back, stiff body posture and of course the baring of the teeth.

Watch the clip below to see what happened to Tammy and the aggressive Chihuahua.

From the looks of it, Sunshine was just scared. She was fearful of all the strangers looking at her. But when Tammy chose to be kind to her, Sunshine warmed up and even became an adorable dog to the only human who showed her extra love and attention.

All dogs deserve a second chance, even those who are deemed as aggressive dogs. Do you have experience with an aggressive dog that eventually warmed up? Please share your story in the comments.