Home Team Doggy Tips Dog Aggression: How To Deal With It 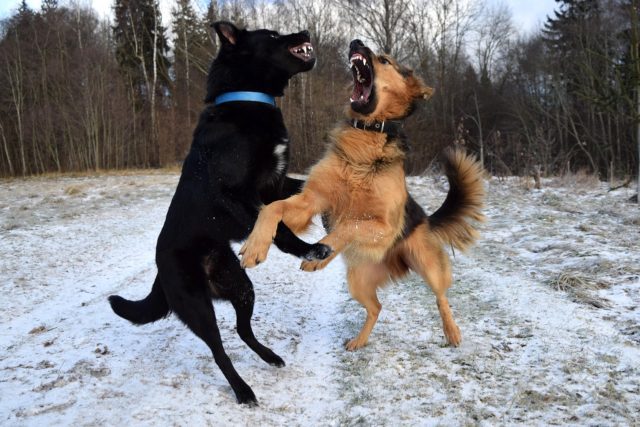 Aggression is seen as a really common problem in dogs’ behavior. It is also the most serious one. It also ranks as the top reason why dog owners actually go out and find professionals to help them with this. Professionals can be in the form of a vet, a trainer, or a behaviorist.

Using counter-conditioning and desensitization training to stop dogs in your household from fighting can be effective if done properly.

Dog aggression is a complicated issue with its corresponding serious consequences that’s why it is always advised to seek professional help when your dog is showing this behavior.

Fear is usually the main reason why aggressive behavior happens in dogs. This can be when a dog is not being raised in a humane manner and he feels fear. It can also simply occur in the presence of other dogs.

When a dog is afraid you can end up with a dog that becomes aggressive. Sometimes, the behavior is made even worse when those who try and tame the dog actually take advantage of techniques that are based on punishment.

As for territorial aggression, dogs can bark and may even charge at people or other animals encroaching on their territory or their home. Dogs are often valued for this level of territorial behavior just like their wild relatives, the wolves, and coyotes.

Some dogs will even set out and attack and then bite any intruder, and it does not matter to the dog if the the intruder is their friend or some total stranger. Territorial aggression can occur along the dog’s regularly patrolled boundary or at the boundaries of his owners’ property.

Similarly, possessive aggression is aggression directed toward humans or other animals that approach the dog when it is in possession of something that is highly desirable, such as food, or a toy.

On one hand, redirected aggression happens when heightened emotion like anger becomes so intense that it needs a release and the target shifts from the original opponent to the source of interference. That’s one reason why people are bitten when trying to break up a dogfight.

Predatory aggression, on the other hand, is the basic animal aggression motivated by the need to get food.

Dogs vary in aggressiveness. This is a very dangerous problem with behavior. It’s quite difficult for vets to diagnose. Treating it is also quite tricky. Dogs have different tolerance to causes of aggression so you can never really predict it. However, general temperament, breed, age, and gender are factors for change and reduced aggression.

What Can I Do If I Have An Aggressive Dog?

Many techniques on modifying dog behavior may bring about negative effects if wrongly applied. Even highly skilled professionals with years of experience get attacked occasionally. For that reason it is deemed risky to live with an aggressive dog and also risky to treat one.

Qualified professionals can observe the dog and create a plan to tame the temperament of the dog based on the movements and intricacies in your family. The professional can also provide you with coaching so that you would be able to enforce the plan even better.

Monitoring would also be done so that the progress could be checked. If there is a need for any modifications, then he would be able to do this as well.

For the meantime, take precautions. Spay or neuter your dog. Keep your loved ones and other animals safe. Supervise and isolate your dog’s activities until professional help arrives.

Remember that you are accountable for your dog’s behavior and you should take care so that other people and animals are not hurt by him. Use a muzzle if he is out in public with you.

You already know the triggers of your dog’s aggression. Try as much as possible to avoid them.

But whatever it takes, don’t punish your dog for bad behavior as the problem will only get worse. Punishment tends to make him more fearful and aggressive. Punishing him may lead to heightened aggressive behavior and may hurt you. This may, in fact, be the root cause of his behavior.

Have you had success taming an aggressive dog? We’d love to hear what worked for you in the comments.