Home Dog Breeds The Bullmastiff: What You Need To Know 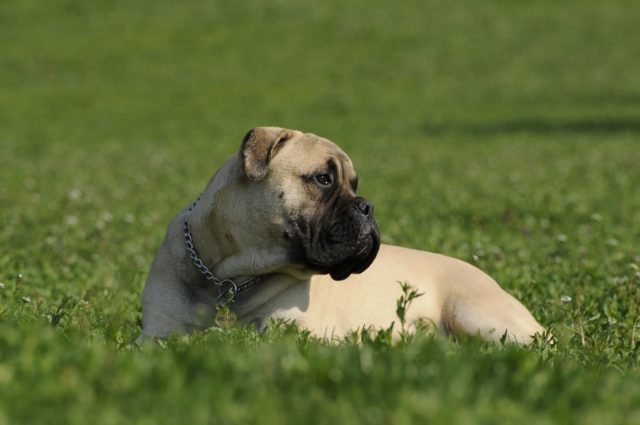 The bullmastiff is a fearless guard dog. They are wary and alert when it comes to strangers, but is exactly the opposite when it comes to their loved ones. They only require minimal grooming care because the breed has a short, easy to care coat. (learn how to groom a bullmastiff here) However, his drooling can be a problem.

A certain Mr. Burton of Thorneywood Kennels had challenged people at a dog show that he will escape from a muzzled dog which he brought with him -the prize being one pound which was a large sum of money in 1901. Not surprisingly, the man was caught and knocked down by the dog three times.

The dog was a bullmastiff and anyone who knows about the breed was not surprised at all. The breed was created and developed by the gamekeepers on England’s great estates. The dogs were bred to be strong, confident, courageous and really fast.

The appearance of a bullmastiff can be formidable, which can easily deter a would-be attacker or intruder. They are powerfully built, making them an ideal guard dog, at the same time a loving family companion. As long as he is properly trained, the bullmastiff can grow to be a confident, trustworthy dog breed in general.

Generally considered a clean dog due to their short coat that is easy to groom, the only downside is their drooling. With this in mind keeping a towel handy is a good idea.

If you live in an apartment and are looking for the right dog breed, then a bullmastiff could be the best pet for you. They can adapt and live comfortably in many apartment or condo living conditions as long as you can meet his daily exercise needs.

Even though a bullmastiff is a big dog, he doesn’t require a lot of physical activities. Short walks or quick playtime is enough to meet his needs. Obviously, it will be different when it comes to puppies. They have more energy than an adult bullmastiff. Good news is the breed will settle down by the time he is two years old.

Although he is not that hyperactive as expected due to his physical size, they can still excel in many dog sports. It includes agility, conformation, obedience, and tracking. Thanks to the breed’s calm nature and comical expression, bullmastiffs can become super therapy dogs.

When you train a bullmastiff, guide him with firmness, fairness, and consistency. This will help establish the rightful head of the house. If you let him have his way, he will soon be running things over. Early socialization is also necessary to help him deal with different people, new sights, experiences, etc. easily.

The bullmastiff is a natural guard dog. Therefore, he is alright to be left alone in the home when his owners may need to work long hours. Just see to it, he will get plenty of human interaction during at-home hours.

The bullmastiff was recognized in 1924 by England’s Kennel Club and in 1933 by the American Kennel Club. The breed was also the breed for Fascination of Felons Fear in 1934. Today, the breed ranked 40th among the 157 breeds registered by the AKC – which proves his quality as a companion.