Home Dog Breeds The Black Russian Terrier: What You Need To Know 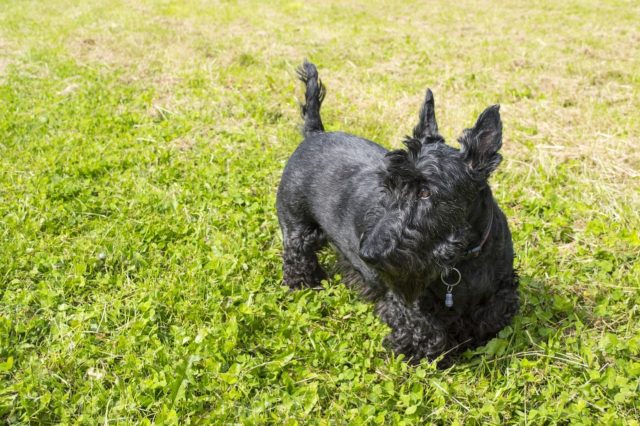 As a confident dog breed, the Black Russian Terrier are highly intelligent majestic black beauties. They make excellent guard dogs that can be used to protect a home or a business. But they can also play with the family’s children and excel greatly in many obedience competitions.

Also called Blackies and the “Black Pearls of Russia”, the breed is very people-oriented. They want to be close to human action at all times. Their devotion to their family can be outstanding, but they can become very aloof and indifferent when it comes to meeting new people as well as other pets.

A plus for many dog owners is that they don’t shed very often and don’t bark. The breed’s stance is very impressive, due to their large bones and well-developed muscles.

The most significant characteristic a Black Russian Terrier has is his strong protective instinct. And if combined with the breed’s size, agility, and courage, you can have an outstanding guard dog that will do anything to protect his family at any cost. Because they thrive on human attention, they love to spend more time with their humans. They love to play with their humans rather than with other pets.

Just like any highly intelligent dog breed, the Black Russian Terrier responds best to a firm but consistent training. Respect is very important for the breed. If you don’t respect him he will never follow your command. A Blackie that has never received proper training nor kept busy can become a really destructive force.

Because of the breed’s intelligence, some dog owners may deem it to be scary. If you think you can’t handle the breed, then the Blackie is not the right dog for you. However, because they love to please their humans, they can be easily trained. The breed is a natural performer who knows how to entertain a crowd.

Like most big dogs, the Blackie is slow to mature. But he house trains easily and doesn’t need to be leash-trained. He won’t thrive very well if he is placed in a kennel.

The Black Russian Terrier was bred by the Soviet Army scientist to produce a perfect working dog. Their responsibility was to patrol the borders alongside soldiers. They have been very helpful to them.